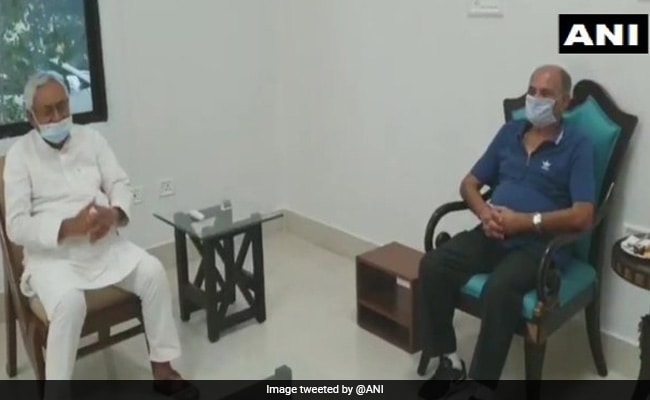 Sitting at a distance from each other and wearing masks – COVID-19 cases are rising in Bihar – the Chief Minister and the actor’s father, KK Singh, exchanged greetings before they moved to discussing the case briefly. Mr Singh was accompanied by his eldest daughter and her husband, an Indian Police Service officer.

Mr Singh alleged had the Bihar Chief Minister not intervened and recommended a CBI probe into his son’s death, the Maharashtra government would have closed the case.

The Patna-born actor was found dead in his apartment in Mumbai’s Bandra on June 14. Eventually, Mr Singh filed a First Information Report in Patna against his son’s friend and actor Rhea Chakraborty, alleging she cheated her son financially and drove him to suicide.

Nearly two months later, the Bihar government asked the Central Bureau of Investigation to take over the case, which meant the Patna Police and the Mumbai Police would no longer pursue it.

The Chief Minister reportedly told Mr Singh and his family that the state government felt something wrong when Maharashtra Police did not cooperate with Patna Police officers who had gone to Mumbai to investigate the case. An Indian Police Service officer from Bihar was kept under quarantine for hours after he landed in Mumbai on August 3. The Bihar government decided to let the Central Bureau of Investigation (CBI) take over the case due to these incidents, the Chief Minister said.

The high-profile case has seen twists from allegations of money-laundering to drug deals. The drugs angle is being invested by the Narcotics Control Bureau or NCB, which has already interrogated several Bollywood A-listers such as Deepika Padukone and Sara Ali Khan.

Some leaders of the ruling parties in Maharashtra have alleged the Bihar government politicised the actor’s death with an eye on the state election scheduled next month. Former Bihar Police chief Gupteshwar Pandey, who asked what was Rhea Chakraborty’s “aukat” (status) after the Supreme Court allowed the CBI probe, has now joined Nitish Kumar’s JDU after taking early retirement.

Leaders of the JDU have said they are not politicising Mr Rajput’s death, but considering the sentiment of the people in the state, they want justice for the “talented actor”.

The Shiv Sena in Maharashtra had alleged the Bihar Chief Minister wants to cash in on the sympathy wave for the actor’s family ahead of the three-phase election to be held on October 28, November 3 and 7.